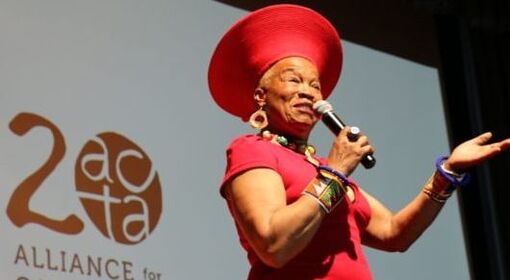 As recipient of US Artist Fellowship, Jones expanded her work in jails and educational institutions internationally. She conducts Medea Projects in South African prisons, working with incarcerated women and training local artists and correctional personnel. In 2012, she was named Arts Envoy by the US Embassy in South Africa.

KQED FORUM
Hosted by Michael Krasny on Feb 3 at 9:40 AM
Rhodessa Jones on Decades of Art and Activism [AUDIO]
https://www.kqed.org/forum/2010101881883/rhodessa-jones-on-decades-of-art-and-activism

On Friday, January 15, 2021, Rhodessa Jones gave a presentation on "Medea in Lockdown" to the CHS research community. The event was recorded live via Zoom. Please note that the presentation includes adult language and mature themes. In "Medea in Lockdown," Rhodessa Jones focuses on the work of the Medea Project: Theater for Incarcerated Women/HIV Circle and its engagement with ancient myth, which is at the heart of the group’s artistic process. The Medea Project came into being in 1989; it takes its name from Jones’ work with women incarcerated in the San Francisco County Jail, including one who had killed her own child out of desperation and anger at her baby’s father. Since then, Jones has worked with women in jails and prisons around the world, as well as women with HIV and AIDS diagnoses, to develop and perform their personal stories of trauma, addiction, and disease as a mode of healing. The Medea Project’s form of art as social activism has been consistently informed by classical myths that frame and ground the women’s own experiences. In this seminar Jones will present the transformational writing of incarcerated women that has developed from their encounters with mythic figures such as Medea, Demeter and Persephone, Inanna, Pandora, Sisyphus, Daphne.